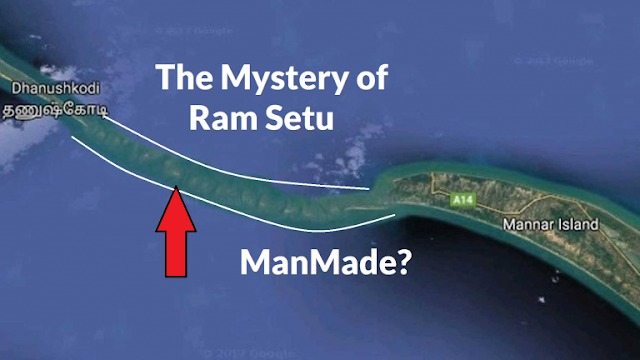 Facts About Ram Setu You Must Know:

1) According to the Valmiki Ramayana, the Monkey Army built the Ramasetu to go to Lanka (Ravana’s Place).

2) According to the Puranas, There was no other way to go to Lanka. So, Hanumanji’s army decided to cross the sea by building a bridge over the sea.

3) According to the belief, it took 5 days to build the Ram Bridge. On the first day 14 Yojans, on the second day 20 Yojans, on the third day 21 Yojans, on the fourth day 22 Yojans, and on the fifth day 23 Yojans respectively. One Yojana was about 13-15 kilometers long.

4) According to the religious scriptures, the length of Ramsetu was 100 yojanas and its width was about 10 yojanas.

5) According to Valmiki Ramayana, Nala, the son of Bishowkarma was the architect of Ramasetu. Nala had guided the Monkey army.

6) Ramasetu is a deep stone chain between Rameswaram in southeastern India and Mannar Deep in northeastern Sri Lanka. The depth of these rocks in the sea is 3 feet to 30 feet.

7) It is said that one can go from Rameshwaram to Mannar Deep by walking on Ram Bridge till the 15th century. However, a tsunami in 1480 caused part of the bridge to collapse and sink.

9) It is said that the monkey army used stones, tree branches, and leaves for the construction of Ram Setu. The feature of this bridge is that these stones never sank in the sea here.

10) According to scientists, the stones used to build the Ramsetu Bridge were PUMICE STONE. These rocks are rocks formed from volcanic lava.