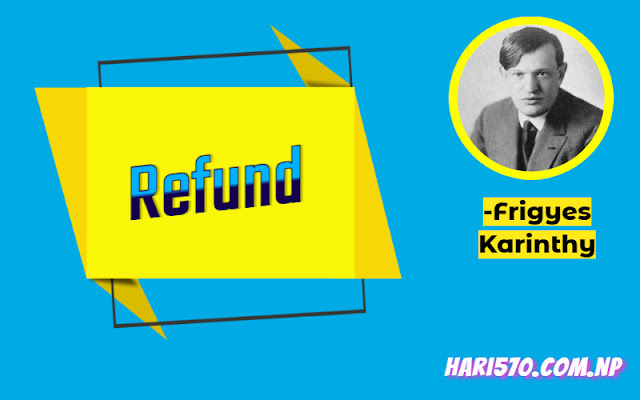 a. Why does Wasserkopf demand a refund of his tuition fees from the school?

➜ Wasserkopf demands a refund of his tuition fees from the school because he is unemployed. He has failed numerous times in his attempts to find a suitable job for himself. He considers himself a loser at the age of forty solely because of his education. He is unable to find work. Even if he gets a job, he will not be able to keep it for long. People tell him that he is unfit for anything and that he hasn’t learned anything worthwhile in school wherever he goes to apply for a job. Leadrer, an old classmate, agrees and advises him to demand tuition fees from his old school.

b. Why does Wasserkopf consider himself good for nothing?

c. What did the teachers decide to do when Wasserkopf asked for a refund?

➜ The teachers decided to honor Wasserkopf’s request for a re-examination and pass him in all subjects, even if his answers were incorrect. They decided to band together and assist one another during his examination. They agreed to prove Wasserkopf’s answers to their questions correct.

d. Why did Wasserkopf give ridiculous answers? Why did the teachers accept these answers?

➜ Wasserkopf gave ridiculous answers in order to fail the exam by any means necessary and receive a refund. Teachers accepted his answers because they wanted him to pass the exam for the sake of their school’s reputation.

e. How does the Mathematics Master describe Wasserkopf’s character?

➜ Wasserkopf is described by the Mathematics Master as a sly and crafty individual who intends to deliberately fail his exam in order to recoup his tuition fee. Wasserkopf, in his opinion, is a bad-tempered man with a bad speaking style. He is a unique individual who irritates all of the teachers with his abusive language.

f. How did the teachers outwit Wasserkopf?

➜ Teachers outwitted Wasserkopf by using their brains properly. Wasserkopf did everything he could to fail his oral exam by giving absurd answers. However, the teachers proved his incorrect answers for various reasons. Wasserkopf was surprised to find his answers correct. He received a pass in every subject. His request for a refund was denied. Finally, he was expelled from school.

g. What is the final judgment on Waserkopf’s demand of refund?

➜ The final judgement on Waserkopf’s refund demand is a rejection of the refund. The outcome is favourable to all teachers. Except for one, all of the teachers agree that Wasserkopf’s answers are correct. The school’s principal declares Wasserkopf distinction in all subjects. He has received certification and has been congratulated on his graduation.

a. Read the extract from the play given below and answer the questions that follow:

“It’s possible I’ve changed. What the hell…! Your class records will show I’ve got a right to come here.”

i. Who is the speaker? Who is he speaking to?

➜ Wasserkopf is the speaker. He’s speaking to the principal of his former school.

ii. Why is the speaker say these words?

➜ The speaker says these words because he is dissatisfied with his educational records from his previous school, which he obtained eighteen years ago.

iii. Where is the speaker at this moment?

➜ The speaker is in the Principal’s office at this moment.

b. Read the extract dialogue given below and answer the questions that follow:

“THE STAFF: (bowing, heartily) How do you do?

WASSERKOPF: Who the hell are you? Sit down, you loafers! (He grins, waiting to be thrown out)

THE PRINCIPAL: How dare you –”

ii. Is Wasserkopf’s response polite enough to the staff?

➜ No, Wasserkopf’s response to the staff isn’t polite enough. He uses derogatory language against them.

iii. How does Wasserkopf rebuke the staff?

➜ Wasserkopf rebukes the staff, calling them “loafers” and asking, “Who the hell are you?”

iv. What does the principal mean by ‘How dare you -’?

➜ The Principal is referring to Wasserkopf’s dare to make abusive remarks about masters when he says, ‘How dare you?’

c. Explain the following line of the play:

“Because I didn’t get my money’s worth, that’s why!”

➜ This line was spoken by the play’s main character, Wasserkopf. In this line, Wasserkopf explains his reason for his arrival and demand to the school’s principal. According to him, his education from school did not provide him with his money’s worth in his life. He has been rejected numerous times in his life. He considers himself to be worthless.

d. What is the theme of the play?

➜ The play’s theme is wit and cooperation. This play showcases teachers’ wit and unity in the face of an ill-natured old pupil Wasserkopf who returns to his old school with an absurd demand. This play is a satire on today’s educational system, which has failed to prepare students for life.

e. Sketch the character of Wasserkopf.

➜ Wasserkopf is a forty-year-old poor and greedy man. He was born in Hungary. He is a bad-tempered man who has been fired several times for his bad manners and rude behaviour. He has no knowledge of any subject. In his life, there is no such thing as shame or respect. He thinks he’s good for nothing. He walks into his school and demands his tuition fee without hesitation. He is immoral in his interactions with the Principal and other teachers. He refers to the teachers as ‘loafers.’ He refers to the History Master as a ‘numskull,’ the Physics Master as a ‘cannibal’ and a ‘whisked balloon,’ and the Maths teacher as a ‘old stick in the mud.’

➜ Yes, I believe that our educational system does not adequately prepare students for life. The current educational system is disconnected from the concept of practical life. It has nothing to do with a practical way of life. It has diverted people’s attention away from creativity and rendered them impractical. In today’s world, there are many educated people with high certificate values who have no knowledge of anything. They don’t even have the ability to guide others. As a result, the current educational system is producing ineffective workers in a variety of industries.

b. Our education system focuses on memorisation rather than creative thinking. Do you think the knowledge imparted by education may not have practical relevance in one’s day-to-day life? Who do you blame for this?

➜ Yes, I believe that the knowledge imparted by education may not be practical in daily life. We find education and its related knowledge far away from creative thinking in the context of the present system of education. The education courses are designed in such a way that they are unrelated to practical relevance in daily life. These educational materials have no application in real life. People who are struggling in academic fields are also looking for an easy way to memorize rather than creative thinking. The majority of students are on the wrong track, focusing solely on passing exams and receiving certificates. For them, creativity has no place in their lives. They are only concerned with obtaining excellent certificates through various means. This is directly attributable to the current educational system, which has corrupted thousands of minds.

c. Most of the students want to learn just for examination rather than knowledge. Do you think that certificate will help them in their future career?

➜ No, I do not believe that the certificate will benefit students in their future careers. At the moment, the majority of students are on the wrong track. Their preparation for the exam has a time limit. They are seen a lot more frequently before two or three months of their examination. They are far from the concept of knowledge, but they believe in quick fixes to pass their exams. The method they’ve chosen to pass their exam isn’t good for their future. Because certificates never reveal true knowledge or talent, they will undoubtedly face a lack of authentic knowledge in the future. Most students nowadays obtain certificates through dubious means as well.