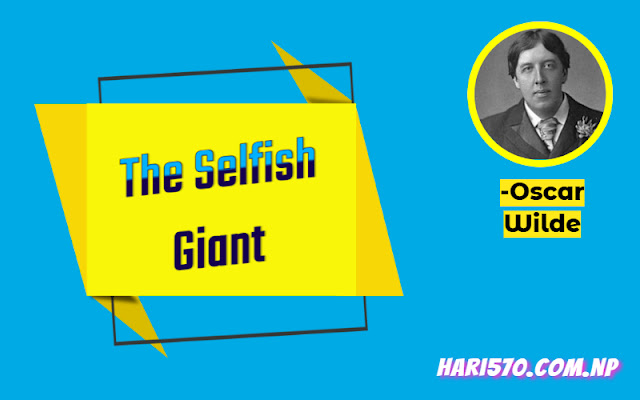 a. Where did the children use to play?

➜ The children use to play in a beautiful garden of the giant during afternoon time after school.

b. What did the Snow and the Frost do to the garden?

➜ The snow and the Frost were the two agents who appeared in the giant’s garden after the rude behaviour of the giant against the children. The Snow covered up the grass with her great white cloak and the Frost painted all the trees silver. They even invited the North Wind to stay with them.

c. What did the giant hear when he was lying awake in bed?

➜ The giant heard some lovely music of a little singing bird linnet when he was lying awake in bed. He heard the music after a long time.

d. Why do you think spring season never came to the giant’s garden?

➜ I think the spring season even became sad along with the children. She became so angry and never came to the giant’s garden to find the giant’s rudeness and selfishness against the innocent children.

e. How did the giant realise his mistake?

A. Read the extracts given below and answer the questions that follow.

a. “How happy we were there!” they said to each other.

i. Where does ‘there’ refer to?

➜ ‘There’ refers to the giant’s garden where children used to play after school.

ii. What does ‘they’ refer to?

➜ ‘They’ refers to the children who used to come and play in Giant’s garden after school.

iii. Why are they saying so?

➜ They are saying so because they aren’t allowed to play in the giant’s garden anymore. The giant has chased them out of his garden being furious.

i. Who is the speaker?

➜ The speaker is an old and feeble giant who keeps on watching the children at their play sitting on his armchair.

ii. Who is he speaking to?

➜ He is speaking to himself admiring his garden.

iii. Who are ‘the children’ that the speaker is referring to?

➜ ‘The Children’ that the speaker is referring to are the small and innocent school children who enjoy a lot in the giant’s garden.

iv. Why is the speaker saying that ‘the children are the most beautiful flowers of all’?

c. When the little child smiled at the Giant, and said to him, “You let me play once in your garden, today you shall come with me to my garden, which is Paradise,” shortly afterwards, the happy giant dies. What is the coincidence of this event? Describe it in relation to this fairy tale.

➜ The next time, the little child reappears in one of the garden’s corners. The giant is quite old and feeble at that time. The child appears this time to favour the giant who once had favoured him to play in his garden. The giant keeps on searching and waiting for the little child. He is in reality alive only to meet the enchanted little child. Finally, after the little child’s words, he dies in the very afternoon.

➜ Here, the writer has perfectly used a figure of speech. The three examples of personification are the Snow, the Frost and the north wind. The significance of the seasons personified in the story is that they are related to nature and play a very vital role in transforming the giant’s garden with a unique force against bad deeds.

C. This story can be read as a fairytale, where the children, the seasons, the tree, the corner of the garden, the snow, the wind and the frost are all used as symbolism. Interpret those symbols.

D. Which figure of speech is used for ‘winter, frost, snow, north wind, hail and little child’? Who is the little child compared to?

The little child is compared to the Chrisitan God ‘Lord Jesus’ here in this story. This little child has been presented with divine powers who has the power to change each and everything. Due to his presence, the garden has been bloomed with beautiful leaves and flowers. The signs of two nails on the palms and feet of the little child have reminded us of the crucifixion of Lord Jesus.

a. What is the main theme of this story?

➜ There are various themes here in this story as arrogance, consequences of selfishness, love and compassion, the concept of salvation etc. Good deeds are always rewarded whereas bad deeds are always punished. Here, we simply find the arrogance of the giant and his selfishness against the children which have brought bad results for him. But, due to his good deeds, he has got a fine platform to reach outside.

b. Does God punish those who are cruel to children and very selfish?

➜ Yes, God punishes those who are cruel to and very selfish. Children are supposed to be very innocent and babies of God. They are known for their simplicity. Their presence is the sign of good omen. We can get a fine example from this story about God’s punishment to the giant. He feels guilty himself for his bad deeds.