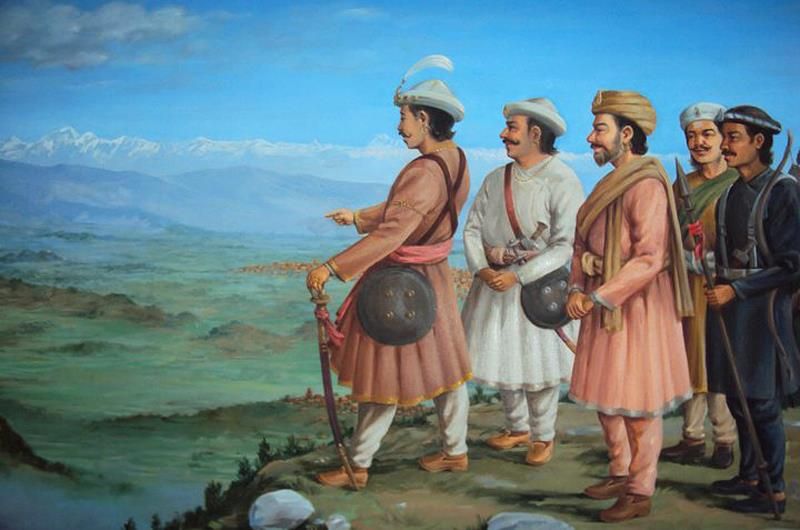 Prithvi Narayan Shah was the son of King Narbhupal Shah and Queen Kausalyavati of Gorkha, a small mountainous state in Nepal. He was born on Thursday 27, Poush 1779 BS.

From his childhood, he was very brave, bright, intelligent, and hardworking. From the beginning, he was given the knowledge of Ramayana, Mahabharata, and later Sukraniti. He also excelled in archery, swordplay, and horse racing.

His first marriage was to Princess Indra Kumari of Makwanpur. When he had to travel between Gorkha and Makwanpur. He took a good look at the topography of the valley and its economic condition. At that time, people from 1,200 households in Gorkha did not have enough food or money for six months. That is why he thought of conquering the prosperous and prosperous Kathmandu Valley.

Prithvi Narayan Shah, who arrived in Kathmandu in 1798 BS, delivered the Pagari brought on behalf of the Gorkha Palace to King Ranajit Malla of Bhaktapur. After learning that he went to Changunarayan, Pashupati, and Guheshwari while returning to Gorkha. King Jayaprakash Malla of Kathmandu took him to the palace and befriended him.

After Narbhupal Shah’s death in 1799 BS, he became King of Gorkha at the age of 20. Before becoming king, he had studied the political life of the Kathmandu Valley well. As Prithvi Narayan Shah wanted to conquer the Kathmandu Valley and the eastern region, he joined forces with his powerful opponent, King Ripumardan Shah of Lamjung. In 1799 BS, a treaty was signed saying that if the two states succeeded in capturing Argha from Kaski, they would give the wood to Kaski.

To realize Father Narbhupal’s dream of unification. In 1800 B.S., under the leadership of Biraj Thapa Magar and Maheshwar Pant, invaded Nuwakot. But, the Gorkhalis were defeated at Nuwakot. Faced with defeat at the Battle of Nuwakot, Prithvi Narayan Shah went to Vanaras to collect the necessary weapons.

He travelled to Kashi for his father Narabhupal to achieve virtue. And he changed the tribe from his Bhardwaj tribe to the Kashyap tribe. At the same time, he made a treaty with King Hari Shah of Jajarkot, who had gone on a pilgrimage, to expand the kingdom.

Prithvi Narayan Shah attacked Nuwakot for the second time in 1801 BS under the command of Kalu Pandey. This time, all the Gurkha youths between the ages of 12 and 20 were armed. And the number of soldiers exceeded 1,000. Some of these soldiers were brought to Nuwakot as farmers.

After that, Kalu Pande sent a letter to Jayant Rana. Who was stationed in Nuwakot Raksha, saying that there was no other good for him except meeting him in Gorkha? However, Jayant Rana arrived in Kathmandu and demanded more troops and weapons, informing them of a possible Gorkhalis attack. But Jayaprakash Malla ignored Jayant Rana’s demand as Indrajatra was in full swing in the valley.

After the conquest of Nuwakot and Velkot, the Gorkhalis captured Lamidanda. But Tanahun’s desire to capture Lamidanda increased the possibility of a confrontation between Tanahun and the Gorkhalis. But after Prithvi Narayan Shah sent a message to Guru Gaureshwar Pant that he would make a treaty with the King of Tanahun, after some time of negotiations, the King of Tanahun, Trivikram Sen, hid in the side according to the scheduled time.

The Gurkha army captured Trivikram Sen and briefly captured Tanahu. This kind of work is likely to enrage Lamjung, Kaski, Parbat. In 1810 BS, Trivikram Sen was launched. And, in 1812 BS, the Gurkha army had to fight against the combined forces of Lamjung and Tanahun. In this war, the Gorkha suffered a great loss of life and property. However, Naldum, Dahchok, Mahadev Pokhari, Siranchowk, as well as Kulekhani, Ipa, Malta, etc. were captured and the Gorkha border reached Makwanpur.

The first attack on Kirtipur

In 1814 BS, Prithvi Narayan Shah attacked Kirtipur. There were 1,200 soldiers on the Gorkha side. But when Kirtipur called for help from Kathmandu, Lalitpur, and Bhaktapur, there were about 300 troops on the Kirtipur side. After a six-hour battle between the two sides on the Balkhu River, many Gorkhalis lost their lives.

Prithvi Narayan Shah, who was captured in Kirtipur, survived only due to the moral rule of not killing the king. Kazi Kalu Pandey, who had died in the first battle of Kirtipur, was replaced by his son Vanshraj Pandey and Kehar Singh Basnyat, son of Shivram Singh Basnyat. In 1816 BS, he conquered Shivpuri and Kavre.

The second attack on Kirtipur

In Bhadra 1821 BS, a second attack occurred in Kirtipur under the leadership of Shur Pratap Shah, Daljit Shah, and Shri Harsh Pant. Even in this war, Kirtipur did not receive military support from the valley as before, but the people of Kirtipur did not allow the Gurkha soldiers to break through the Gopura fort and enter Kirtipur. In this battle, Shur Pratap lost his sight and some other troops were forced to return.

The third battle over Kirtipur was led by Kazi Vanshraj Pade. He surrounded Gopur fort on all sides and sent some soldiers to Kirtipur as farmers. At that time, when it was time to bring the rice paddy to Kirtipur, the dynasty asked the people of Kirtipur to surrender. In this war, Kirtipur did not receive any military aid from neighbouring states. Therefore, Dhanwant Kazi surrendered at Gopur Fort at Chaitra 3, 1822 BS.

In 1823, he married Ranbhim Shah, son of King Krishna Shah of Salyan, with their daughter Vilas Kumari. Chhilli, Dang, and Deukhari received as a dowry.

Thinking that the first Gorkhali attack would take place in Kantipur, Jayaprakash Malla sought the help of the British with troops and weapons. In 1823 BS, 2,400 soldiers led by Kinlock marched to Kathmandu via Sindhuligadi in eastern Nepal to support King Jayaprakash Malla.

As Prithvi Narayan Shah was already aware of this, Birbhadra Pade, Birbhadra Upadhyaya, and Vanshu Gurung’s group came to Dhungevas to defend Sindhuligadhi. The army of Vanshraj and Bir Bhadra Upadhyaya attacked the advancing army in Pauwagadhi. As a result, the entire British Army put down their guns and guns and fled into the woods for their lives.

When Prithvi Narayan Shah besieged the valley from all sides, an extreme economic crisis occurred in the valley. King Jayaprakash Malla of Kathmandu was a tough, arrogant, and conciliatory person. Then the queen and the nobles pulled him out angrily. And she made her son Rajyaprakash Shah king. But then he regained his power but did not get the sympathy of his son, queen, and nobles. The Kantipur soldiers were frustrated that foreign soldiers were being paid more.

Understanding such a situation. During Indra Jatra on 13 Ashwin 1825 BS, Prithvi Narayan Shah conquered Kantipur by invading Naradevi, Tudikhel, and Bhimsensthan from three sides. King Jayaprakash Malla fled and took refuge in Raja Tejanar Singh Malla of Lalitpur. On Ashwin 25, 1825, Prithvi Narayan Shah sent Dhanwant and Kehar Singh to Lalitpur to surrender. The king of Patan fled without a fight.

King Jayaprakash Malla of Kathmandu and King Tejanar Singh Malla of Lalitpur fled and took refuge with King Ranjit Malla of Bhaktapur. Realizing that there should be no unnecessary delays as they sought help from neighbouring states and the British instead of surrendering, King Ranjit Malla sent 1,500 armed forces together with Vanshraj Pandey, Kahar Singh Basnyat, Ram Krishna Kunwar, Amar Singh Thapa, Kalidas Khadka, etc. .to attack Bhaktapur. There was a war in Bhaktapur in which great loss of life and property was caused.

More than 2,000 people died and more than 500 houses were destroyed. Ranjit Malla surrendered in Mangsir 1, 1826 BS. In the same battle, Jay Prakash Malla was shot in the leg. Following his wish, Prithvi Narayan Shah arranged for him to go to Pashupati. Mitbabu Ranjit Malla, 67, arranged for him to stay in Kashibas at his wish. He died 18 months after arriving there. As King Tejnar Singh Malla of Lalitpur expressed no wish, he was imprisoned for life at Bhaktapur Durbar.

After retaining power in the three cities in the valley, Prithvi Narayan Shah set out to conquer twenty-four kingdoms in the west. In 1828, an army led by Vanshraj Pandey and Kehar Singh Basnyat was dispatched among the combined forces of the twenty-four states. In 1828, a fierce battle took place. During the 16-hour battle, more than 500 Gorkhalis, including Kehar Singh Basnyat, were killed and generals like Vanshraj Pandey and Prabhu Malla fell into enemy hands.

Hence, Ranbir Pandey and Prabhuu Malla surrendered their weapons to the enemy and led the rest of the soldiers to Kathmandu in despair.

Prithvi Narayan Shah finished the works of those who surrendered their weapons to the enemy and took Rs. 60 for the price of a gun. This defeat hurt the ambitions, dignity, and prestige of the Gurkhas and aroused in the enemies a defensive feeling that victory could be achieved if they fought hard against the Gurkhas.

Prithvi Narayan Shah, who had gone to Nuwakot in mid-Mangsir, 1831 BS to avoid winter, fell ill at Nuwakot Durbar. As his health deteriorated, he was taken to Devighat. He remained on the dock for nine days and died at 7 a.m. on January 20. It is also mentioned that he died after being seriously injured in a tiger attack while out hunting. While on the ferry, he gave lectures on the geopolitical situation, social life, defence, and development of Nepal, also known as the “Divine Sermon”. “Nepal is like a yam between two stones. The king of the south is very intelligent. Nepal is a common flower garden of four characters, thirty-six castes.” Etc. Prithvi Narayan Shah delivered relevant sermons. He died at the age of 52 on the day of Maghe Sankranti at Mohan Tirtha on Devighat, the confluence of the Trishuli and Tadi rivers in the Nuwakot district. However, his death is mysterious and controversial!