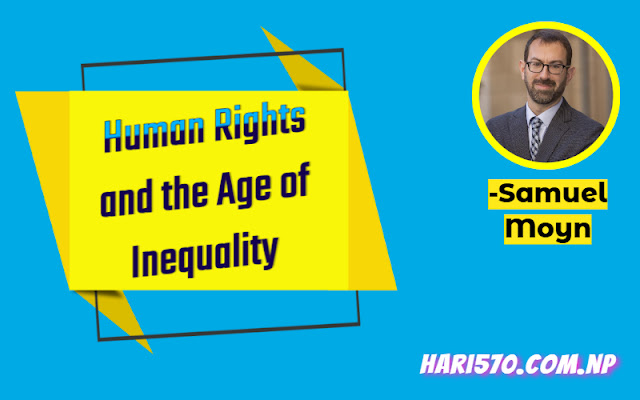 Samuel Moyn is Jeremiah Smith, Jr. Professor of Law and Professor of History at Harvard University. In 2010, he published The Last Utopia: Human Rights in History and his most recent book is Christian Human Rights. His areas of interest in legal scholarship include international law, human rights, the law of war, and legal thought, in both historical and current perspectives. In intellectual history, he has worked on a diverse range of subjects, especially twentieth-century European moral and political theory. He has written several books in his fields of European intellectual history and human rights history. His book Not Enough: Human Rights in an Unequal World (2018) is the most recent work. He is currently working on a new book on the origins and significance of the humane war for Farrar, Straus, and Giroux. Over the years he has written in venues such as Boston Review, the Chronicle of Higher Education, Dissent, The Nation, The New Republic, the New York Times, and The Wall Street Journal.

In “Human Rights and the Age of Inequality,” Samuel Moyn addresses the dramatic mismatch between the egalitarian crisis and the human rights solution, which requires a supplement rather than a substitute. He claims that the human rights regime and movement are simply unprepared to confront global inequality.

Moyn opens the essay with a parable where he states about Croesus (last king of Lydia), a wealthy king who thought of himself as the happiest of mortals. He desired his citizens remained happy and free from all sorts of suffering but he had one problem that he didn’t want to invest his money to remove the sufferings of his people. He had collected his funds for himself which were later controlled by the Persian King Cyrus the Great and his army. after he was being defeated. The author associates this situation with the modern world where inequality exists and available means and resources are distributed unequally, The writer states that December 10 is celebrated as Human Rights Day every year‘ there is no any steps forwarded for equal access of rights and property among rich and poor in the world. There is only one solution to these all sorts of obstacles: distributive equality but he ﬁnds it is almost impossible in practical life or reality. According to the writer, writing the history of human rights to that of political economy involves two big stages:

Franklin Roosevelt issued his famous call for a ”second Bill of Rights“ that included socioeconomic protections in his State of the Union but it missed three most important facts: Provincial America’s entry into North Atlantic consensus; Promising freedom from want; and envisioning it everywhere in the world. Human rights after 19403 suffered much as it followed favouritism and divided the world into two groups mentioning US-led democratic nations and USSR-led communist nations resulting cold war. in the same way, decolonization of the world during the post-war era could not bring desired development and human rights among the nations since these states favoured “national welfare” instead of supporting egalitarian human rights.
Samuel Moyn depicts an issue of whether another human rights movement is necessary or not and then cites the example of truth and reality mentioned in Herodotus‘ history which dealt with the need for redistribution of global socioeconomic justice under the pressure from the rich to poor. Though the human rights activists argue that human rights assert equal freedom and rights to human beings in documents and assure them but in fact, it is not applied in present real-life situations. Human beings won‘t receive original and fruitful freedom and truthful rights until and unless this present economy and sociopolitical structure exist. Thus, a fair portion of the distribution of wealth and property from rich to poor, redistribution of means and resources, formulating and implementing laws for fair distribution of wealth by the government and massive and radical movements are required for egalitarian society though these all are impractical and inapplicable and very hard to take place in reality.
Above all, our common destiny is like that of the world of Croesus’ world where rich enjoy the happiness, freedom and everything to a maximum level like the colonizers in the British Rule while the poor live in the world of illusion with their ﬂoating equality and freedom.