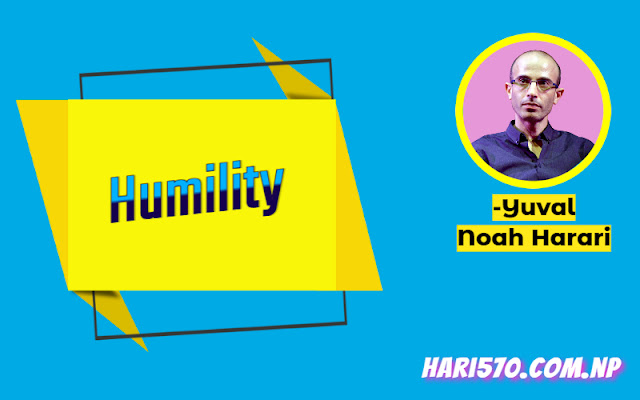 Prof. Yuval Noah Harari is a historian, philosopher, and the bestselling author of Sapiens: A Brief History of Humankind, Homo Deus: A Brief History of Tomorrow, 21 Lessons for the 21st Century, and Sapiens: A Graphic History. He is a Co-founder of Sapienship, a multidisciplinary organization advocating for global responsibility whose mission is to clarify the public conversation, support the quest for solutions and focus attention on the most important challenges facing the world today. He is now a lecturer in the Department of History at the Hebrew University of Jerusalem.

Harari exemplifies the virtue of humility in that he debunks humanity’s illusions of superiority and mastery. He claims morality, art, spirituality and creativity are universal human abilities embedded in our DNA.

Yuval Noah Harari, a well-known essayist from Jerusalem, wrote the essay Humility. In this essay, he displays humility by debunking humanity’s illusions of superiority and mastery. Morality, art, spirituality, and creativity, he says, are universal human talents encoded in our DNA. The author displays the virtue of humility in this essay, which may be characterised as “a recognition of the real limits of our techno-social knowledge and ability,” by debunking humanity’s illusions of superiority and mastery. According to Harari, humility is a trait that most societies lack. Most individuals feel that they are at the centre of the universe and that their culture is the foundation of human history.

Greeks think that history started with Homer, Sophocles, and Plato and that pivotal ideas and innovations were born in Athens, Sparta, Alexandria, or Constantinople. Some Indians think that ancient sages in the Indian subcontinent devised aeroplanes and nuclear bombs long before Confucius or Plato, let alone Einstein and the Wright brothers.

The Jews feel that monotheism should be credited to them and that they are a prominent group in the world — one of the top three faiths. However, there are only 15 million Jews, and there is no reason to believe that they are more significant than the Hindu faith, which has considerably more adherents. Each group considers itself to be the centre of the world, as well as the creator of the most significant ideologies and accomplishments.

However, no group is genuinely unique; some version of their ideology and ideas existed before them. The faiths that survived were the most aggressive — they managed to convert the greatest amount of people to their beliefs. For example, the Biblical phrase “love thy neighbour as thyself,” which Jews claim as their own, had previously occurred in China.

Similarly, monotheism has its origins in Egypt and was not initially Jewish. Monotheism has led to global catastrophe, and no one should be happy about having developed it. A few centuries after its creation, Christianity prohibited all faiths save the Jewish religion, although many Jews were still persecuted, whereas Islam now considers all history previous to Mohammed to be meaningless.

Many outstanding concepts, according to Chinese nationalists, originated in their culture. The Jews believe that they are God’s chosen people and that gentiles are not on pace with them in terms of importance. While some sages have advocated for religious tolerance, the historical trend has always been to persecute those who hold opposing views. Ironically, this is the very self-centeredness that most faiths warn against.