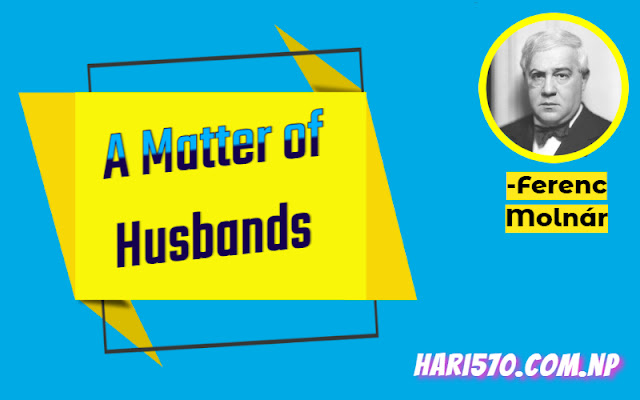 “A Matter of Husbands” by Ference Molnar is a twisted one-act play. It describes the tale of an Earnest Woman who is married to a lawyer who is closely associated with a Famous Actress. The Earnest Young Woman seeks out the Famous Actress because she suspects her husband is having an affair with her. The acclaimed actress tells a story of a well-produced act in which a man tries to fool his wife into giving him more affection. We learn that the husband was hiding in the closet the entire time when the Famous Actress eventually tries to persuade the Earnest Woman that the story is real.

This play examines the roles of actors on stage and in real life, as well as how much they are capable of fooling us. The Earnest Young Woman appears on stage at the start of the play, impatiently waiting for the famous actress. Earnest Young Woman runs up to the Famous Actress as she approaches the stage through the door, yelling violently at her to return her husband. The famous actress flatly denies stealing her husband. She claims she knows him because he was handed the contract for a case. She inquires of Earnest Young Woman as to what leads her to assume Alfred is in love with her to weave a tale to fool the earnest young woman.

The actress smiles and continues to deny receiving any flowers or letters from him after hearing this. The famous actress now says that something weird happened to make Earnest Young Woman believe that she and her spouse had a misunderstanding. Earnest Young Woman is persuaded by Famous Woman that her husband is playing with her to make her jealous and reclaim her attention and love. After that, the young lady recognizes her mistake and apologizes. After the eager young lady i.e. the earnest young woman exits the stage, a famous actress calls Alfred from her personal bedroom. The play comes to a close in this way.