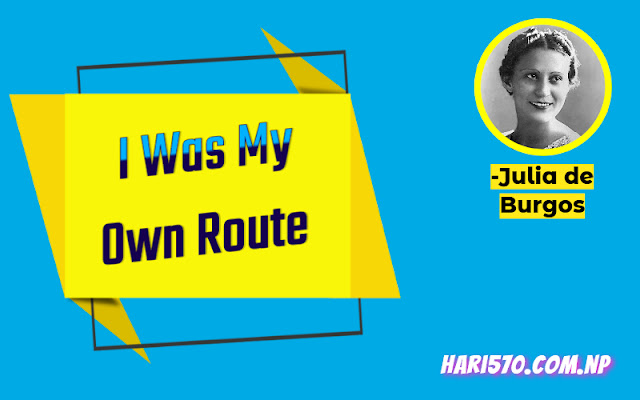 I Was My Own Route Poem by Julia de Burgos Exercise: Questions & Answers Class 12 English

a. Why did the speaker try to be the way men wanted her to be?

➜ The speaker tried to be the way men wanted her to be because she was curious to see what the males expected of her and how they would act as a result of their patriarchal male concept.

b. What do you understand by her feet ‘would not accept walking backwards’?

➜ By her feet ‘would not accept walking backwards’, We understand that she refused to accept males’ inferior concept of females and instead desired to race like males with equal resources in order to achieve the ultimate objective of independence and equality.

c. Who are the old guards? Why did they grow desperate?

➜ The old guards are traditionalists who are obsessed with the patriarchal system. They grow desperate when they see the poetess improving the lives of the poor and striving for their independence.

d. How did the speaker have ‘a feeling of intimate liberation’?

➜ As she crossed the patriarchal society’s barrier and kissed a new path of liberation, rejecting the old one defined by males, the speaker had “a feeling of intimate liberation.”

e. Why did the speaker’s desire to follow men warp in her?

➜ Because of the pre-established patriarchal society and its rules, the speaker’s desire to follow men warped in her. She desired freedom and pleasure, but she was compelled to adapt to men’s established concepts and ideas.

a. What does the speaker mean when she says she was playing a game of hide and seek with her being’?

➜ When the speaker says she was playing a game of hide and seek with her being in the third line of the first stanza and again at the end of the poem, she means to demonstrate her rebellious character and rejection of masculine mentality that restricts women within four walls. It also suggests that she requires liberation in order to break free from the gender stereotype picture of females and pursue her own path.

b. Why, in your view, was her back ripped by the old guards as she was advancing forward?

➜ In my view, her back was ripped by the old guards as she was advancing forward because as she progressed, the old guard created several obstacles, traditions, norms, and threats of patriarchal ideology. The old guards relate to ancient traditions, cultures, norms, and patriarchy-determined values in this context, yet she requires liberation and race in her desire for freedom. As a result of the limits, hindrances, barriers, problems, and blockades established by the society’s old guard, her back was ripped and she suffered greatly.

c. What, according to the speaker, did it feel like to be free?

➜ According to the speaker, to be free means being able to pursue her dreams and follow her own path without any societal or masculine restrictions. It means walking and feeling like a man, participating in society in every manner as a man, and receiving long-awaited liberation for what they desired. For her, it’s the same as choosing her own path and carrying out her own duty, defying the patriarchal ideology imposed on women by the old guard.

d. Why does the speaker prefer the present to the past?

➜ Because her past was unpleasant, difficult, and troublesome, the speaker prefers the present to the past. She had been through a lot in her life. Patriarchal mentality caused her a lot of pain. She was restricted by patriarchal boundaries. She was the one who was made to laugh and play with. She was unaware of her heart’s freedom and emancipation. She was limited in what she could do based on her wishes. She was subjected to abuse, exploitation, and deprivation by her family. However, she currently feels released and free of patriarchal conceptions. Male ideology is collapsing at an alarming rate. Females have begun to reap the benefits of freedom, and strong male-dominated ideas are on the decline in today’s culture. She believes she has complete freedom over her choices and decisions.
She is free to work and visit wherever she wants. Hence, the speaker prefers the present to the past.

➜ John Donne, in his poem “No Man is an Island”, says, “No man is an island entire of itself.” He is referring to the entire human race and their importance in the evolution of society. The expression “no man is an island” represents the belief that humans function poorly when they are isolated from others and must be a part of a society to survive. It signifies that no one is fully self-sufficient and in order to live, everyone must rely on the company and comfort of others. I agree with John Donne and support his concept of societal equality in every aspects. He talks about male and female equality, but Burgos appears angry and upset by the male-dominated culture, and she expresses her displeasure and rejection of male philosophy and ideas that limit women’s liberties and chances in society. She appears to be a radical feminist who not only advocates for female freedom but also challenges male norms and beliefs. In any case, I admire Donne because he advocates for the development of society as a whole, including the advancement of both men and women.

a. Write an essay on My Idea of Freedom.

➜ My Idea of Freedom – An Essay

The right to be free does not mean the freedom to violate and disregard other rights. Furthermore, freedom entails enjoying the beauty of nature and the environment in which we live. Only those who have earned or spent their lives for something can truly understand its true worth. Freedom from oppression is also synonymous with freedom. It also refers to freedom from racism, harm, hostility, and discrimination, among other things.

Furthermore, freedom allows for open debates, which aid in the exchange of important ideas and thoughts for the advancement of society. Moreover, this is the only right that is intimately linked to all other rights. More importantly, it is necessary to communicate one’s thoughts about society and other topics.

To summarize, we might say that freedom is not what we believe it to be. It’s a psychological construct that everyone has their own take on. Similarly, different people place a different value on it. However, there is a strong correlation between freedom and happiness.


b. Not all people, however, seem to agree with the kind of freedom upheld by Burgos in this poem. For example, William Faulkner, in his novel Requiem for a Nun, says, ‘“The past is never dead. It’s not even past. All of us labour in webs spun long before we were born, webs of heredity and environment, of desire and consequence, of history and eternity.” Do you agree with Faulkner? Why? Why not?

➜ Of course, not all people seem to agree with the kind of freedom upheld by Burgos in this poem. William Faulkner, in his novel Requiem for a Nun, says, ‘“The past is never dead. It’s not even past. All of us labour in webs spun long before we were born, webs of heredity and environment, of desire and consequence, of history and eternity.”

Everything we do and experience in the future will become history. We’re trapped in the crossfire of history and karma that began before we were ever born in the webs we’ve been creating since the dawn of time. Our existence, like time, moves in a straight path. We shall always be surrounded by the past. It’s impossible to say something happened if we’re still thinking about it and making decisions based on it. Whatever happened, it becomes a part of our history, but the memories it generates remain on in our minds, thus the past never truly ends. It implies that we are always locked in the past. It will be with us until the point of death.

We might assume from Julia Burgos’ poem “I Was My Own Route” that she wishes to be fully free of her past because it  was so unpleasant. However, this is difficult to achieve. Julia de Burgos’ fight for independence absolutely disproves the idea that there was a past before her. She wishes to escape men’s presence in order to establish her own identity by denying the past and rejecting men’s existence. However, if males are disregarded, the world will come to an end. She is a radical feminist, which implies she is enraged by men’s dominance of women. It is vital that both sexes be present for the sake of humanity’s survival. The past shapes our identity and guides us through every decision we make. His perspective on the past is realistic unlike Burgos expresses in her poems. We cannot completely ignore our past as it assists us in every path of our life. Hence, I completely agree with Faulkner over Burgos as his perspectives and ideas are based on reality and truth.

1 thought on “I Was My Own Route Exercise: Questions & Answers | Class 12 English”