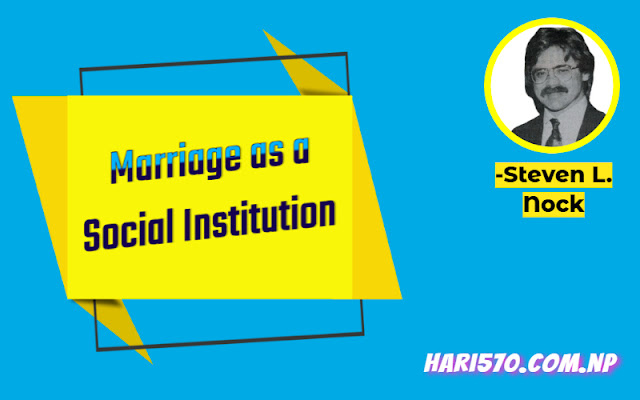 Summary of the Essay “Marriage as a Social Institution” by Stephen L. Nock Class 12 English

Steven L. Nock (March 11, 1950 – January 26, 2008) was a researcher, author, and the Commonwealth Professor of Sociology at the University of Virginia. He wrote extensively on the role of marriage in society and worked in the Federal Department of Health and Human Services as a consultant on American family policy. He authored textbooks and articles about the causes and consequences of change in the American family. He investigated issues of privacy, unmarried fatherhood, cohabitation, commitment, divorce, and marriage. His book, Marriage in Men’s Lives won the William J. Good Book Award from the American Sociological Association for the most outstanding contribution to family scholarship in 1999.

Marriage is the union of two spouses who are bound by legal, moral, and traditional obligations and have a variety of deep personal bonds and social links. It is a structured framework that integrates with other institutions such as family, education, economy, law, and politics. In many ways, the connection between couples is governed by rules, and they exist inside soft borders to follow the patterns. Marriage is distinguished from all other types of partnerships by its soft boundaries or permitted bounds of behaviour. The institution of marriage distinguishes married couples from other partners. They form part of a large system of well-understood concepts that assist in the organization and maintenance of lives after marriage.

For males, marriage is extremely important since it gives their lives structure and arranges their goals. Dr Stephen backs this argument with a quote from Emile Durkheim, a French sociologist. Emile believes that marriage prevents suicide by legitimizing demands for happiness, comfort, luxury, and prestige. Suicide rates are lower among married persons than among unmarried ones. Men become better citizens as a result of marriage, and it aids them in discovering their life’s purpose. Unbounded longings and desires are controlled by marriage. Marriage binds a man to the same woman for the rest of his life to satisfy his needs for love and moral equilibrium. He neglects other pleasures, performs his duties, limits his desires, and finds contentment in his own family as a result of marriage.

Unmarried Cohabitation widely known as Living Together is becoming more common by the day. Unmarried cohabitation is a situation in which two people live together but are not married. It is on the rise because the partners can live a joyful and happy life free of the restrictions of marriage, without having to abide by established and approved bounds, with incredible freedom of choice, and without being constrained by a wide variety of conventions and laws. Their relationship, however, is not widely accepted or legal since they do not adhere to traditional norms, such as behavioural restrictions, no commitment to each other, no identity, and no institutional relationship. As husband and wife, a married couple follows patterns, customs, and rules and receives acceptance from everyone. They happily announce one other as husband and wife. Laws, religion, and conventions all safeguard their relationship.

Aside from that, marriage serves as a form of social capital. It depicts interpersonal relationships. It establishes a link between trustworthiness and confidence. The foundation of the new connection is trust and belief. New relations are introduced to the husband and wife. The relationship is necessary, and it necessitates assistance and support in times of need. Social capital benefits individuals. Individuals with high social capital are inserted into networks that facilitate the exchange of valued knowledge and information among all members. Social norms and social sanctions (honour, position, etc.) support such networks by promoting some activities while limiting others. Marriage is a valuable individual asset, but it is more difficult to maintain because it is only a relationship with one another.

Marriage distinguishes itself qualitatively from other types of relationships due to its soft boundaries. The numerous normative marriage rules define the relationship because adult individuals have options in their spouses, heterosexual relationships; husbands will be the primary earners, partners will be sexually faithful to each other, and they will become legitimate parents of their children. Law, religion, and customs all safeguard their relationship. Because of suitably channelled habits and aspirations, it is a sort of social control. There is a shared sentiment amongst others. Marital relations surpass all other types of personal relationships.