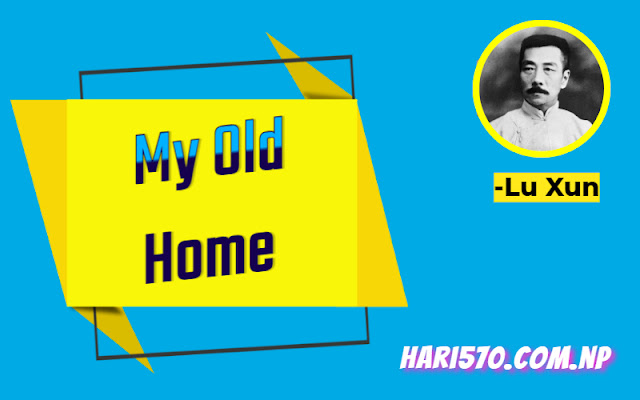 About the Author: Lu Xun

Lu Xun or Lu Hsun (1881-1936) is the pen name of the writer born Zhou Shuren. He was born to a family with a strong Confucian background. His grandfather served as a high official in Beijing, and his father was also a scholar. Lu Xun has been considered China’s greatest writer in the 20th century. He was a short story writer, essayist, and translator who is commonly considered the ‘father of modern Chinese literature.’ Known for his satirical observations of early 20th-century Chinese society, he is celebrated as a pioneer of modern vernacular Chinese literature and was one of the most important thinkers of his time. His popular novels and short story collections include A Madman’s Diary (1918), Kong Yiji (1918), Medicine (1919), Tomorrow (1920), An Incident (1920), The Story of Hair (1920), A Storm in a Teacup (1920), Hometown (1921). The story ‘My Old Home’ is taken from the short story collection Hometown.
“My Old Home” is a story about Xun’s memories, from youth to middle age that depicts the conflict between memories and realities. The story describes how Xun feels while being away from home for many years. Upon arriving at his long-past home, his memories are forced to come to confront the realities. His prior conceptions and understandings of the world come into conflict with his realities.

The story “My Old Home” takes place in China, in the narrator’s hometown of a little village. He returns to his childhood home. Although his hometown has not improved, it is not as sad as it once was. The major reason he is returning to his previous house is to send his home a final farewell and to shift his family to another location where he works. He has many flashbacks to his childhood while he is there. He reflects on a great bond he had with Runtu that did not endure long. He has fond memories of Runtu. Runtu was just over ten years old when the narrator first met him. That year, it was his family’s time to oversee a large ancestral sacrifice. The sacrificial vessels had to be guarded. Runtu was given the task of looking after the sacrificial vessels after the narrator’s father granted permission. He was thrilled because he had known Runtu for a long time and knew he was around his own age.
The narrator meets Mrs Yang, who used to spend practically the entire day in the beancurd shop. Everyone used to refer to her as Beancurd Beauty. Runtu then arrives to see the narrator. He has grown to twice his former size. He acts as if the narrator is his master and ranks higher than him. The narrator and his mother come across Runtu, who is suffering from poverty. Following his departure, his mother suggests that they should provide him whatever they are not going to take away, allowing him to chose for himself. He selects two long tables, four chairs, an incense burner and candlesticks, and one balance that afternoon. He also requests that all of the ashes from the stove be removed. The narrator, along with his nephew and mother, departs from his old home at the end of the storey. He learns that all of his memories, as well as his former home, are being abandoned.

Lu Xun’s ‘My Old Home” is an autobiographical novel about the authors’ persona, Lu Xun, as the narrator and his memories which he is recalling of his childhood in his brilliant home. He can’t describe how much he loved it and how proud he was to grow up in the home. The story projects the conflict between recollections and realities.
The narrator revisits his Old Home after twenty years in 1911 during the overthrow of the Qin Dynasty; he doesn’t believe his eyes at first. Here, his Old House as a symbol represents his old recollections. He is greeted by his mother and nephew. So many changes have been made but not in positive tracks rather he finds his house in a ruined position, twenty years of weather, renovations and other families. Lu Xun reconciles with his relatives including Mrs Yang, a neighbour who accuses him of being miserly. Xun feels ashamed when the bean curd lady says he is being miserly for he does not want to give away his furniture. His prior conceptions come into conflict as he faces the realities of his Old Home town.
He comes to know that his old childhood friend Runtu will be reuniting with Lu at the home. He recalls his brief relationship with his childhood friend and a part-time labour boy, Runtu. Their friendship was lively, positive and brother-like. They enjoyed talking about catching animals like Badgers. Zha and Hedgehogs. They were not so worried about the outside world.
After 30 years, as time passes and people change, Runtu became much more mature as he experiences a rough life due to heavy taxes social responsibilities, famines, bandits, officials and landed gentry. These factors have influencedRuntu’s attitude towards the narrator. Runtu does not act like a friend towards Xun, but rather an inferior acquaintance since Lu Xun ranks higher than him in society. When Runtu arrives the first thing he says is “Hello Master.” This is when Lu realizes that Runtu wasn’t really his friend but more of a servant, their friendship was mutual but not the way Lu thought. Runtu behaves as if the narrator is his master and has a higher status than him.
Finally, Lu hopes his children don’t come to realize the class differences in China and hopefully they won’t’ drift apart that affect their friendship. Xun hopes that his nephew won’t lose his friendship with Runtu’s son. He hoped that both of them will not suffer from social responsibilities like Runtu.
To wrap up, the story forwards a message that as one leaves one destination for better opportunities and place, he/she recollects memories behind it. Xun highlights the importance of loyalty through the wary character of Runtu. A friendship won’t last if one is only caring about himself and wealth. Their friendship changes because of the hardships they go through. Society dictates, disallowing them to be friends. People from different classes cannot interact and develop mutual relations. They have to fulfil their roles in certain positions.