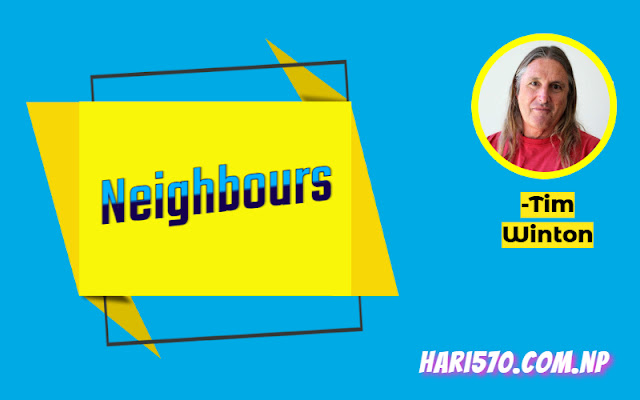 a. Describe how the young couple’s house looked like.

➜ The young couple’s house was small, but it had the feel of an elegant cottage thanks to its high ceilings and paned windows. The young man could see out over the rooftops from his study window and used car yards the Moreton Bay figs in the park where they walked their dog.

b. How did the young couple identify their neighbours at the beginning of their arrival?

c. How did the neighbours help the young couple in the kitchen garden?

➜ Under the watchful eye of their neighbours, the young couple removed trash from their backyard and ploughed and manured the soil in the autumn. They planted leeks, onions, cabbage, brussels sprouts, and broad beans, prompting neighbours to approach the fence and provide suggestions for spacing, hilling, and mulching. The young man was annoyed by the interruption, but he listened carefully to what was said. Also, the big woman with the butcher’s arms handed her a bag of garlic cloves to plant. In this way, the neighbours helped the young couple in the kitchen garden.

d. Why were the people in the neighbourhood surprised at the role of the young man and his wife in their family?

➜ The people in the neighbourhood were surprised at the role of the young man and his wife in the family because of the late hour at which the newcomers got up in the mornings.

Their neighbours were also shocked by the young man’s decision to stay at home and write his thesis while his wife worked.

e. How did the neighbours respond to the woman’s pregnancy?

➜ The neighbours smiled at them nonstop after learning of the pregnancy. The man in the deli gave her small chocolate gifts and he handed the packages of cigarettes that he kept at home because he was not a smoker.

Italian ladies began to offer names in the summer. The young woman was stopped on the street by a Greek woman who pulled her skirt up and felt her belly, assuring her it was destined to be a boy. The woman next door had knitted the baby a suit, complete with booties and a beanie, by late summer. The young woman was flattered, claustrophobic, grateful, and irritated all at the same time.

f. Why did the young man begin to weep at the end of the story?

➜ The young man begin to weep at the end of the story reflects the realisation of the young couple after the child was born.

It enables the couple to emotionally find their neighbours’ support. Also, significant occurrences like the birth of a child offer the ability to realize shared humanity. The baby had renewed new perceptions regarding the neighbours, just as described in the prescribed text.

g. Why do you think the author did not characterize the persons in the story with proper names?

➜ A person’s name is both important and unimportant in a multi-cultural community. It’s significant since one’s name is usually distinctive, even if it isn’t in one’s own country. However, it isn’t as crucial because one’s ethnic identity appears to be more important than one’s name.

The author might want to put the narrative in a general category that refers to similar events. Furthermore, the author may wish to show that their ethnic affiliations are more essential than their individuality. Finally, because the story is short, Tim may not want his readers to get too invested in the characters, preferring instead to show a live panorama of a mixed neighbourhood.

a. The story shows that linguistic and cultural barriers do not create any obstacle in human relationship. Cite some examples from the story where the neighbours have transcended such barriers.

➜ They didn’t speak one other’s languages and share a similar culture, thus language and culture didn’t seem to play a role in their communication, yet the young couple appeared to have learnt to shout like their neighbours. After a period of adjustment, the couple figured out how to blend in. Indeed, the text proves that the linguistic and cultural barriers do not create any obstacle in human relationships.

The story explains that when the young couple began to grow a garden, it prompted their neighbours to approach the fence and provide tips on spacing, hilling, and mulching. The couple decided to build a hen house, which they completed with the assistance of one of their neighbours, and they were finally equal to everyone else. They even began to invite one other to dinner parties. These are some of the best examples from the story where the neighbours have transcended such barriers.

➜ Although the couple had not planned for a pregnancy, the young woman becomes pregnant in the spring, and their neighbours become aware of it after a short time. Everyone is willing to assist and is courteous. All of their neighbours are delighted and wish them well after the birth of their child. For the young man, the birth is a marvel, and he learns in the end that the twentieth-century novel had not prepared him for it.

In my view, the major differences the young man found between the twentieth-century novels and human relations are that, unlike characters in novels, humans have to deal with and overcome a variety of unpredictable and startling situations throughout their lives. Everything does not go as well in real life as it does in the novel. To overcome these situations, one must prepare himself in ways that novels cannot teach.

c. A Nepali proverb says “Neighbors are companions for wedding procession as well as for funeral procession.” Does this proverb apply in the story? Justify.

➜ “Neighbors are companions for wedding procession as well as for funeral procession.” Yes, this proverb also applies in the story.

They invited each other to dinner and shared a lot of information. Also, the excitement of the young woman’s pregnancy was shared by everyone in the neighbourhood.

➜ Multiculturalism (or ethnic diversity) refers to the presence of diverse cultures in a community. It is mainly applied to the demographic make-up of a certain place, sometimes at the organizational level, such as schools, businesses, neighbourhoods, cities, or nations, as a descriptive phrase.

I think multiculturalism has become a major issue in the present world because along with making people of different ethnic and cultural backgrounds together, it invites various social problems such as failure to assimilate, ethnic segregation, and adaptation issues such as school dropout, unemployment, and high crime rates etc.

a. Write an essay on Celebration of Childbirth in my Community.

➜ Childbirth celebration is the ceremony or ritual to celebrate the birth of a child with joy and happiness. Various communities have various rituals and traditions to celebrate childbirth. However, In my community, people use to gather at the home of the childbirth and congratulate their parents and family members. They also celebrate this auspicious occasion by singing, dancing and eating delicious foods.

Every year, the birth of a child is celebrated with all pomp and show by the community and friends. To make the birth of a child a memorable and happy occasion, they would cook different food delicacies and offer them to the elders who are considered as the custodian of our tradition. They also arrange small gifts and give them to the babies mother and families.

Mothers are treated with a lot of respect and love during their childbirth. They are given the best care during this period. When a mother is ready to give birth to the child, she would light up diyo and let it flow on the river to ward off evil spirits. They would even do “antihuman sacrifices” to make sure that the child is protected. This is a tradition to ensure the well being of the child.

b. Do the people in your community respond with similar reactions upon the pregnancy and childbirth as depicted in the story? Give a couple of examples.

➜ Yes, the people in my community also respond with similar reactions upon the pregnancy and childbirth as depicted in the story. After knowing about a woman’s pregnancy in the community, community members (especially women) will visit her at her home and spend time discussing the mother’s condition. They also give the woman advice on how to look after her own health as well as the health of her child during this time.

People in my neighbourhood also shower gifts, chocolates, and clothing on the families of pregnant women. They also come up with a lot of names for the unborn child, both male and female.