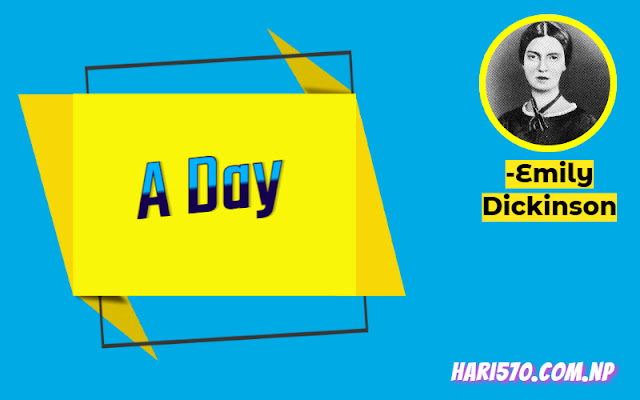 About the Poet: Emily Dickinson

Emily Dickinson (1830-1886), one of the most eminent American poets of the nineteenth century, was heavily influenced by the Metaphysical poets of seventeenth-century England, as well as her reading of the Book of Revelation and her upbringing in a Puritan New England town. These upbringings inculcated in her Calvinist, orthodox, and conservative approach to Christianity. Dickinson and Walt Whitman are regarded as the forefathers of a distinctively American poetic voice. Despite the fact that Dickinson was a prolific poet who frequently enclosed poems in letters to friends, she was not publicly recognised during her lifetime. However, she has steadily grown in fame as a result of her posthumously published poems.

Emily Dickinson in her poem “A Day,” describes a beautiful day that brings the children from innocence to experience using brilliant imagery and symbols.
Emily describes the sunset and sunrise as a village and the things in that village in this poem. However, the poem also portrays the difficulty in recognising the world and environment around us. In the Poem, the speaker of the poem clearly describes how the sun rises, what happens after the sun rises, and how the sun sets. When the Sun first rises, its ribbon-like rays fall over the steeple of the church, transforming its colour to amethyst. Sunrise’s news spreads as fast as the Squirrels can run. In the early morning light, the dark hills are seen, and a small American bird, the bobolink, begins to sing. The warmth of the Sun makes all living things happy and pleasant. The speaker speaks to himself to be confirmed about the Sunrise with its lovely and magnificent beams. The poem is written in four different beautiful stanzas, each of them describing a beautiful day using various imagery and symbols. We can divide the poem into two parts: an eight-line segment describing the sunrise and an eight-line segment describing the speaker’s misunderstanding of the sunset.

I’ll tell you how the sun rose, ___
A ribbon at a time.
The steeples swam in amethyst,
The news like squirrels ran.

The speaker starts the poem by describing to the readers how the sun rises. The sun’s rays are referred to as “ribbons” by the speaker. When the sun shines on the steeple, it glows amethyst in colour. The process of stacking these “ribbons” is gradual. This sensation’s “news” spreads quickly. The speaker’s excitement to discuss sunrise reflects his/her immature perspective of the world. This persona is concerned with seemingly unimportant details, implying to readers that it is acceptable to stop and appreciate “normal” changes in nature, such as the sunrise. In a metaphorical sense, this stanza also refers to the enthusiasm that comes with the start of life i.e. childbirth. In addition, the mention of “Steeples,” a part of a church building, hints at Emily Dickinson’s religious upbringing.

The hills untied their bonnets,
The bobolinks begun.
Then I said softly to myself,
“That must have been the sun!”

This stanza explains the events that occur as a result of sunrise. The sun shines on the top of “Hills,” and “Bobolinks” (a type of blackbird) begin to sing. This stanza highlights similar natural events that appear to be in response to the rising sun. It emphasises the beauty of nature all around us once more, asking readers to be more grateful for it. In this line, the speaker expresses his or her awe by exclaiming, “That must have been the Sun!” This statement reveals that the speaker is a child because no adult would require much description to recognise the sun or its rising.

But how he set, I know not.
There seemed a purple stile
Which little yellow boys and girls
Were climbing all the while

The subject matter in this stanza shifts from sunrise to sunset, and the speaker’s tone shifts from excited to reserved. The child’s confidence shrinks since he or she knows so little about sunsets. Nonetheless, the persona describes what they can, which is more serious than exciting. Dickinson uses this stanza to depict the transition from life to death, therefore it is more metaphorical than literal. On a metaphorical level, the poem “A Day” conveys to readers how little any living thing understands about death. Humans, like the child speaker, prefer to talk about more exciting topics and so keep their thoughts on the dreadful subject to a minimum. The literal imagery in this stanza, on the other hand, depicts the rising sun moving from East to West.

Till when they reached the other side,
A dominie in gray
Put gently up the evening bars,
And led the flock away.

Emily Dickinson’s faith is revealed in the final stanza of the poem “A Day.” This purely symbolic stanza employs Christian themes such as “flock” and “Dominie in gray” to demonstrate the poet’s own perspective on death. Dickinson believes that where a “Dominie in gray” symbolises “God” and a “flock” means “human beings,” God leads human beings wherever they go once they die. The stanza, on the other hand, literally welcomes in the evening as the sun eventually sets. The speaker’s passion is non-existent at this point due to the inactivity of the moment. As a result, ‘A Day’ finishes on a sad note.
Goto Exercise Solution