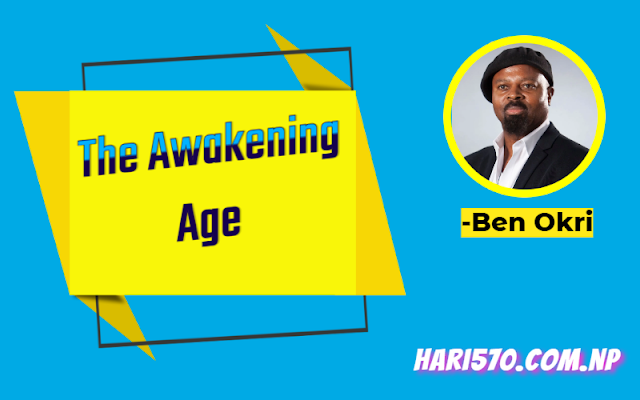 Ben Okri (1949-), a Nigerian poet, fiction writer, and essayist who won the Man Booker Prize for his work The Famished Road, grew up in London. Okri’s writing is influenced by folk stories and dream logic, and it also deals with his family’s experience of the Nigerian civil war. “I was raised in a tradition where there are just more levels to reality: tales and myths, ancestors and spirits, and death,” Okri said in an interview with The National. Jane Austen cannot be used to discuss African realities. This raises the question of what constitutes reality. Every person’s reality is unique. We need a distinct language for diverse perspectives of reality.”

Okri, a brilliant poet and storyteller, depicts the hardships of African people in “The Awakening Age,” as he does in his previous works. In addition, he calls for global unity, peace, and solidarity among people from all walks of life.

In the poem “The Awakening Age,” the poet Ben Okri depicts the struggles of African people and offers a demand for unity, peace, and solidarity among human beings from all over the world. This poem depicts how Nigerians have suffered a long history of starvation, poverty, unemployment, and conflicts (ethnic, religious, political, terrorism, militancy, electoral, and so on) that have rendered them a vulnerable community. Northern Nigeria has been oppressing the Igho group, which has resulted in ethnoreligious conflict. The poem depicts the narrative of a people whose optimism binds them together like glue, even though they are led by invisible powers.

The speaker is trying to address the new people of Nigeria, who have suffered greatly as a result of Nigeria’s horrific bloodshed caused by ethnic, religious, geographical, and economic factors, and encouraging them to share a unified vision of a new, peaceful, and successful country in the first couplet. In geography, a meridian line is an imaginary line that divides the Earth into two hemispheres. It refers to the tensions and divisions that divided Nigerians into two halves in the poetry. Travelling the Meridian line here signifies the change of Nigerians from struggle, poverty, and fragmentation during the civil war to a land of peace and harmony.

The poet asks for the Nigerian people to have a dream of a unified country that glows with the splendour of joy, harmony, prosperity, and unity in the second couplet. After the conflict, when all Nigerians have given up their anger and hate for one another, the awakening age is celebrated.

The speaker says in the third couplet that all people must be united in the aim of nation-building. For a long time, people had hoped for a prosperous nation, but the ongoing conflicts had prevented it. People were segregated into many sects. This hope is like a strong mountain rope that binds people together.

In the fourth couplet, the speaker states that no nation can reach new heights until its people are unified. To bring their nation into prosperity, they must be freed of conflicts, inequalities, and negativity among themselves. They must cross the barrier to go from poverty and division to peace, prosperity, and unity.

The poet emphasizes in the fifth couplet that individuals must adjust their restricted viewpoint to acquire the best prospects. In the past, they had to deal with adversity, challenges, poverty, wars, and social division. These are the factors that have contributed to the country’s decline. If these individuals continue to ignore this truth, the suffering will continue indefinitely.

The poet clarifies in the sixth couplet that poverty and misery are self-invited and that only collaborative efforts using wisdom and creativity, as well as the resources gained, can reduce them.

The speaker adds in the seventh couplet that there will be peace, harmony, and fraternity in any country if everyone is joined by a shared sense of nationalism. In terms of race, culture, religion, politics, and economics, there must be no prejudice or division among people. We can lead our country to prosperity by giving up such things. Nigeria is unified, and its people are conscious of their previous sorrows, so they may now enjoy the benefits of love.