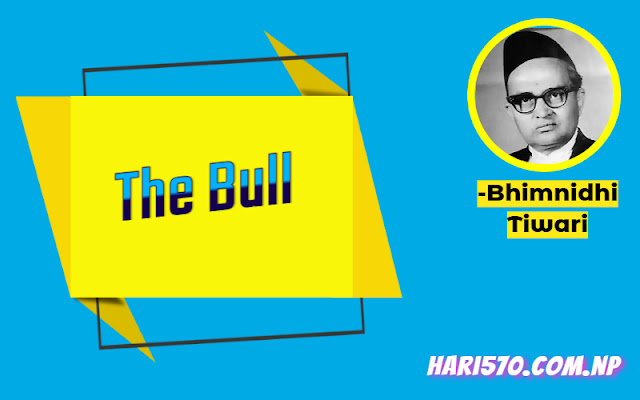 Bhimnidhi Tiwari (1911-1973) is a well-known poet, story writer and dramatist from Nepal. An ardent social reformer, Tiwari established Nepal Natak Sangh (Nepal Drama Society) in 1949. Through this organization, he promoted the Nepali plays by staging plays and encouraging the Nepali writers to write plays. To sustain this organization, he also wrote plays like Matoko Maya, Shilanyas and Sahansheela Sushila, among others. Tiwari won Madan Puraskar for literature in 1970. It was the late eighteenth century. Ranabahadur Shah, the grandson of Prithvi Narayan Shah, was the king of Nepal. Ranabahadur Shah was fond of bulls. In his one-act play “The Bull,” Bhimnidhi Tiwari dramatizes an incident related to Ranabahadur Shah’s craze for bulls to make a biting satire on the feudal system, which dehumanizes human beings to such an extent that their existence depends on their deferential treatment towards the four-footed animals like bulls.

The Bull is a one-act play written by Bhimnidhi Tiwari, a well-known Nepali poet and playwright. The play criticized society’s feudal system at the time (18th century). The drama depicts the death of King Rana Bahadur Shah’s bull, Male, and the terror that three important characters, the bull doctor and two cowherds, Jitman and Gore, are experiencing.

The play is set in the month of Ashwin in the year 1854 B.S. At the start of the play, two panicked cowherds named Gore and Jitman arrive at Laxminarayan’s house. They have come to notify King Ranabahadur Shah about the death of his bull. Laxminarayan begins to shiver after hearing their story. All of them get concerned about the king’s impending punishment. The monarch has the power to put them to death. Laxminarayan is frightened of being punished by having his head shaved. As a punishment for speaking loudly in front of the monarch, Laxminarayan’s lips were once burned. After that, Laxminarayan’s moustache never develops on that side.

He informs the king about the sick bull’s condition. The bull sir, he claims, does not get up and have breakfast. He doesn’t move or speak. He just looks at us with his eyes closed. Laxminarayan begins by complimenting the bull’s beauty, walking style, and heroic battle. He proposes that the bull be transported to the hill to help with climate change and the bull’s health. After hearing Laxminarayan’s statements, the king decides to personally inspect the bull’s condition and leads a convoy on the palanquin to the cowshed at Thulo Gauchara.

Jitman and Gore, on the other hand, are both waiting impatiently at the cowshed for the king’s decision. They consider fleeing to save their lives, but they believe they will be caught and killed again. The king is on his way there. At Thulo Gauchar, Laxminarayan runs ahead of the convoy to advise the cowherds to massage the bull’s back feet and wave the fan at the bull. They respond in kind. Laxminarayan even assures the king that they have been caring for the bull since the early hours of the morning. On the mattress, the bull is truly dead. There is no movement in the area. It isn’t either breathing or eating. Its ears have drooped and its tail has loosened. Fear prevents the cowherds and Laxminarayan from declaring it dead. The bull, according to King Ranabahadur Shah, is dead.

Jitman begins to cry after listening to the king and claims that he has been an orphan since the bull’s death. The King gives him a 400-rupee tip and orders him to stay silent. Gore begins to cry as well. He claims that the bull is more important to him than his mother, father, wife, and children. He declares that he will either join the bull or hang himself. The king grants a tip of 500 rupees after hearing his speech. Finally, Laxminarayan begins to cry and act as if he is in pain. The king taunts him and tells him to bury the bull, supervise the burial procedures, and make sacrifices to the priest. Finally, Gore and Jitman express their joy at being alive.

“The Bull” powerfully depicts the feudal system of the time, in which ordinary people were oppressed, dominated, and dehumanised. The animals of feudal lords deserved greater respect than the animals of commoners. It explores the dehumanisation of common people by rulers, the enslavement of Lords/Kings’ servants, and the domination of the higher classes.