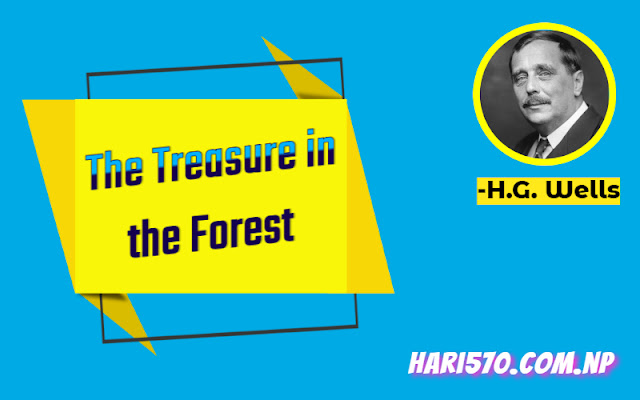 a. Describe the expository scene of the story.

➜ The story opens with the canoe approaching the land, by two treasure hunters, Evans and Hooker, a little river flowing to the sea, the thicker and deeper green forest, sloppy hill, and the sea.

b. What does the map look like and how do Evan and Hooker interpret it?

➜ The map looks like a rough map, creased and worn to the pitch of separation. Evan interprets twisting lines in the map as the river and the star as the place and Hooker interprets the dotted line and straight line and the way to the lagoon in the map.

c. How did Evan and Hooker know about the treasure?

➜ Evan and Hooker knew about the treasure by the conversation of the Chinese man and the map he has.

➜ Evan had a dream about the treasure and Chang-hi. In the dream, they were in the forest and saw a little fire where three Chinamen sat around it and talked in quiet voices in English. Evans went closer and he knew that Chang-hi took the gold from a Spanish galleon after shipwrecked and hid it carefully on the island. He worked alone and it was his secret, but now he wanted help to get the gold back. There was a battle and Chang-hi was brutally killed by them.

e. What do the two treasure hunters see when they walk towards the island?

➜ The two treasure hunters see three palm trees in line with a clump of bushes at the mouth of the stream when they walk towards the island.

f. In what condition did the treasure hunters find the dead man?

➜ The treasure hunters found the dead man lying in a clear space among the trees with a puffed and purple neck and swollen hands and ankles.

g. How did the treasure hunters try to carry gold ingots to the canoe?

➜ The treasure hunters tried to carry gold ingots to the canoe with the help of the Coat of which one end of the collar catching by the hand of Hooker and the other collar by Evan.

h. How were Evan and Hooker poisoned?

➜ Evan and Hooker were poisoned as a slender (thin) thorn nearly of two inches length pricked in Hooker’s thumb and Evan rolled over him and both of them crumpled together on the ground which made them suffered a lot.

a. How do you know the story is set on a tropical island?

➜ The story “The Treasures in the Forest” has been set on a tropical island. It begins with two men, Evans and Hooker, heading in a canoe towards a coral island in the heat of the noon sun, after having paddled all night from the mainland.

As we go through the story, it opens with a canoe approaching land, and the setting of the bay, the white surf of the reef, the litter river, running to the sea, the virgin forest, sloppy hill, and so on. Its atmosphere, ecosystems, thicker and green forest, freshwater stream coastal forest, palm trees, thorny bushes, seagrass and depth sea illustrate the reader to know that the story is set on a tropical island.

b. Why do you think Evan and Hooker took such a risk of finding the buried treasure on a desert island?

➜ I think Evan and Hooker took such a risk of finding the buried treasure on a desert island because of the following reasons:

c. Do you think the narrator of the story is racist? If yes, what made him feel superior to other races?

➜ Yes, I find some sort of racist feelings in the narrator of the story when he presents. Evan and Hooker as superior to that of the Chinese man in the story. In fact, a racist is a person who is prejudiced against or antagonistic towards people based on their membership of a particular racial or ethnic group, typically one that is a minority or marginalized. In the story, we find the Chinese man was brutally killed by Evans and Hooker. When Hooker said to Evans, “Have you lost your wit?”, It also reflects dominating nature of Hooker over Ivan. Thus, many instances in the story state that the narrator of the story looks like a racist.

d. What do you think is the moral of the story?

➜ “The more they desire for greed and power, the more they become selfish” is the moral of the story “The Treasure in the Forest”. Evans and Hooker’s greed increase as they come to know about the treasures. They murdered the Chinese man Chiang-hi brutally and they went in search of treasures with the help of the map.

It is Greed that is the disordered desire for more than is decent, not for the greater good but one’s own selfish interest, and at the detriment of others and society at large. Greed can be for anything but is most commonly for money or treasures and power is much more dangerous and it can lead to someone’s death as well which we find in the story.

a. Interpret the story as a mystery story.

➜ H.G. Wells’ “The Treasures in the Forest” is a mystery story involving two wastrels (neglected situation), the dead body of a Chinese man and thorns that draw blood in Hooker’s thumb. It carries many suspenseful instances such as:

Thus, it is a mystery story.

b. Treasure hunting is a favorable subject of children’s story. Remember a treasure hunting story you read in your childhood and compare and contrast it with ‘The Treasure in the Forest.’

➜ I have read a treasure hunting story named “The Gold Bug” by Edgar Allan Poe.

8 thoughts on “The Treasure in the Forest Exercise: Questions & Answers | Class 12 English”